We hear these terms interchanged all the time. However, each refers to very different but specific stages in bringing tobacco from the fields to the cigar rollers productions bench. Let me try to sort these stages out for you.

Curing – Curing is what occurs to tobacco right after it is picked. Freshly picked tobacco looks very much like any very large green leaf. These raw tobacco leaves are first sorted by size and texture (usually determined from the location on the plant from where the leaf grew) and banded together. These bands are then hung on long poles, which in turn are hung up inside large drying barns. These barns are usually right in the fields from where the tobacco has been grown and it is in these large structures that the tobacco is cured. Curing is the first stage in drying the tobacco out and as it cures, the green chlorophyll in the tobacco turns into brown carotene. This curing stage can take anywhere from four to ten weeks depending on the weather and tobacco. 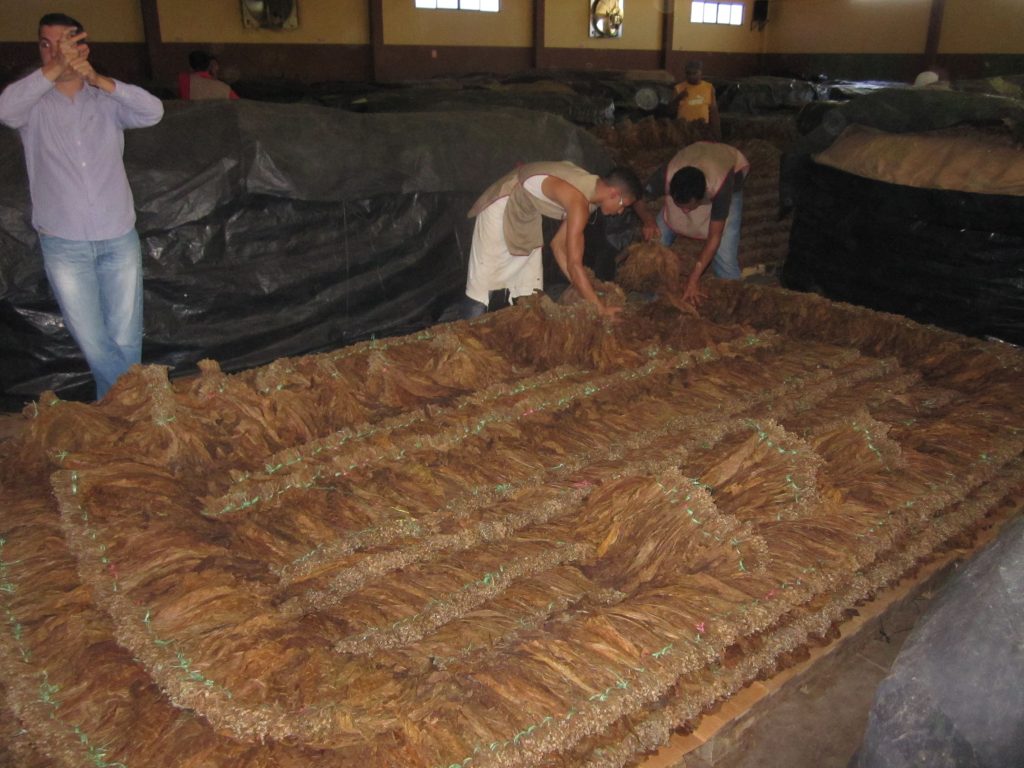 Fermentation  -Once cured, the tobacco is again sorted by size, texture, and now, colour and taken to a factory where the fermentation stage occurs. Tobacco leaves are placed on top of each other such that huge bales and stacks are created often 5′ – 6′ square. These are called burros or pilons. Because these burros are so large with so many leaves piled on top of each other, the heat begins to build up in the center of the burro and the tobacco leaves undergo great chemical and physical changes. This is known as fermentation. As the heat builds up, ammonia, water, and plant sap are released and the starches in the leaves begin to turn into sugars. This fermentation process is very similar to what happens in your compost pile except that experienced workers ensure that the leaves never begin to decompose. They do this by carefully monitoring the temperature in the middle of the burros and as heat builds up to approximately 90° – 100° F, the leaves in each pilon burro are rotated from top to bottom and the burro is rebuilt. This process is repeated 8 – 12 times and each time the heat is allowed to build up until it reaches the desired temperature. Eventually, the heat build-up is less and less with each rotation and fermentation is over.

This fermentation stage is also called “sweating the tobacco” as ammonia and water are literally sweated out of the leaves. Fermentation actually changes the characteristics of the leaves as the molecules within the tobacco are broken down. The release of ammonia and other nitrates helps to reduce the nicotine, tar and acid content in tobacco. Fermentation, which for some tobacco is actually done in several stages, can take 6 – 12 weeks depending on the tobacco (longer if Maduro leaf is desired). The tobacco leaves are now ready to be aged. 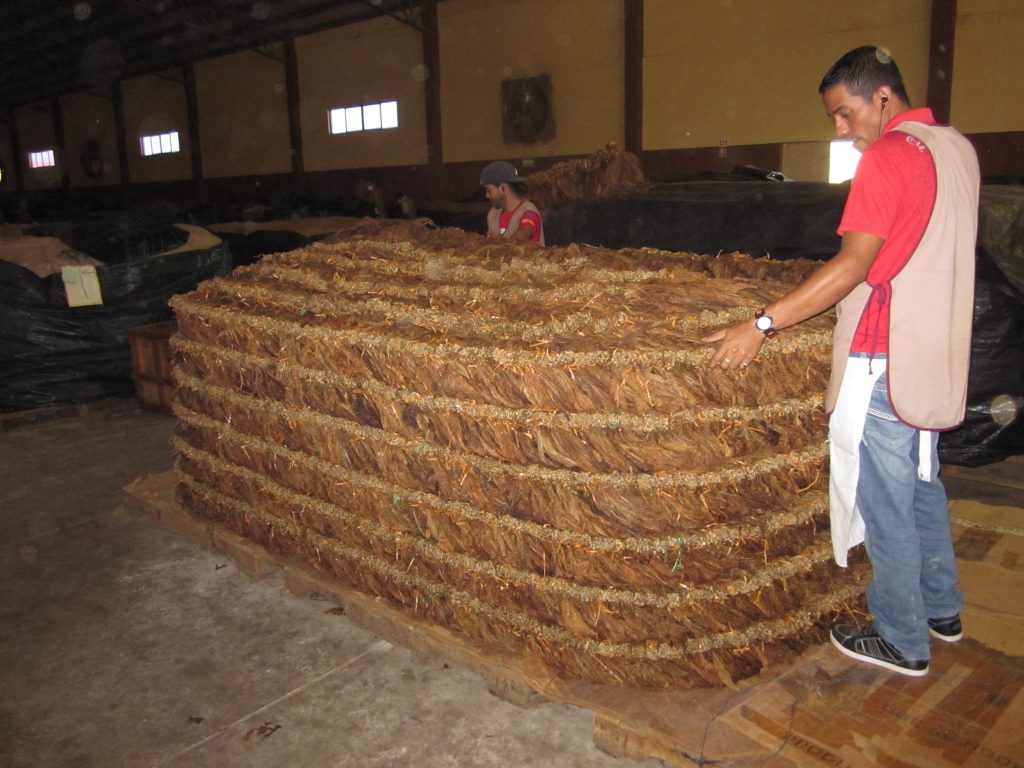 Ageing – The tobacco is again sorted and by this time the leaves have been classified such that the manufacturer knows which leaves will be used for filler, binder or wrapper. The tobacco is then repacked into bales, marked and labelled and then put into factory warehouses to age. The tobacco will age for upwards of 1 – 3 years and in the case of tobacco designated for super-premium and vintage cigars, up to 5 – 7 years. Ageing the tobacco helps to even out the remaining moisture within the tobacco and mature the leaves until they are ready to go into cigar production.

Following this ageing stage, the leaves are almost ready to go into cigar production but these cured, fermented and aged leaves are very brittle and must first be sprayed with a fine mist of water in order to withstand the physical handling of rollers. 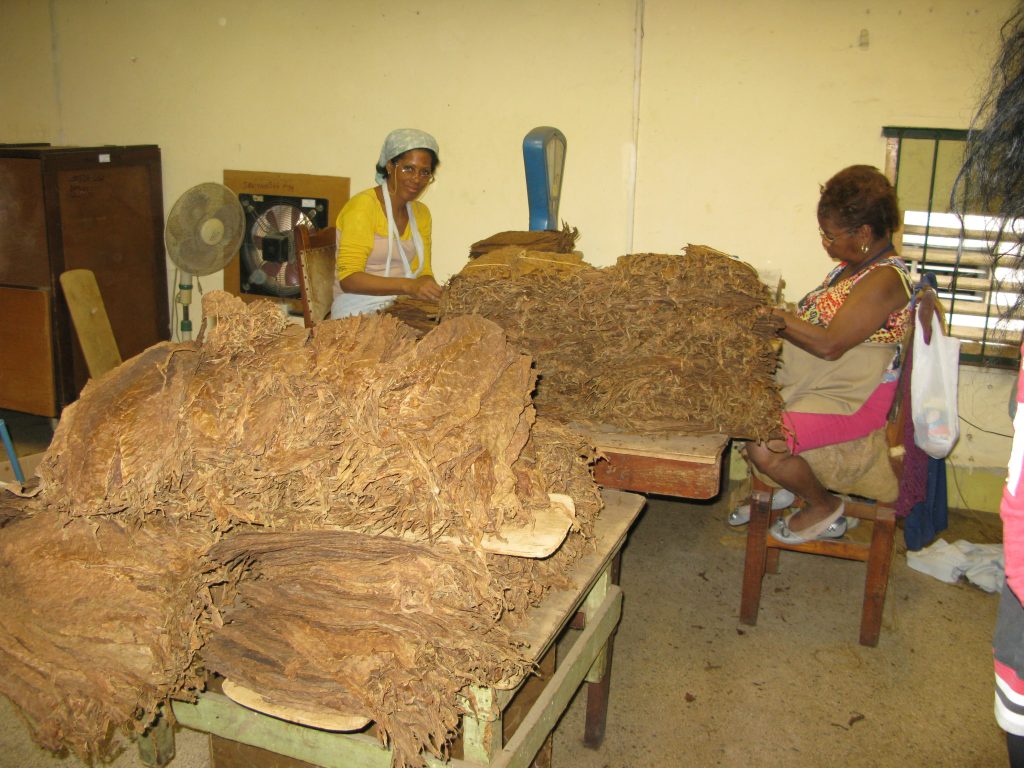 Note: Just to make sure you are ready when we test you on all this, you may be interested to know that freshly rolled cigars are also aged. After leaving the rollers’ bench, cigars are bundled into lots of 50 and 100 cigars and tied with a ribbon. They are then placed into large cedar-lined rooms – their first humidor – where humidity is kept constant and the unique characteristics of the wrapper, binder and filler are allowed to marry with each other (just like the spices and contents in your favourite recipes need to blend together). During this ageing period, which will last 30 – 90 days, the moisture content of the cigars is evened out. Long-aged and Vintage cigars are kept in these rooms longer – Fuente Hemmingways are aged for over 6 months while Davidoff cigars are aged for up to a year and a half.

If you want to know more about different brands and types of tobacco, feel free to walk into Cigar Studio and one of our friendly staff members would help you out. Cigar Studio is a premium cigar shop in Etobicoke. We carry premium range of cigars including Cuban cigars as well as some of the best pipes that you can find in Toronto.